We have a great day at the Preston and Blackpool show. Tom was in a fantastic class of 8 lovely boys, it was a shock when the result was posted showing he had been awarded his 5th Imperial and is now Champion and Imperial Grand Premier Isadoryou Tom Daley. Olly also attended and won his third consecutive Best of Breed. 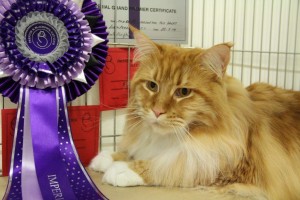